What a weekend! We were very lucky with the weather and the sun shone all day! Thanks to all the volunteers, diggers of all ages, the amazing Museum of Abernethy and everyone who joined us and supported the weekend – we hoped you enjoyed it! A full report of the archaeological findings will be online in due course but here’s a summary of the weekend supported by Aoc Archaeology  for those of you who couldn’t join us.

Our fab wee diggers were first in the trench on Friday with P5 and P6 from Abernethy Primary on site. There trench was 3m x3m in an unused piece

of land off of Dead’s Lane and the hope was to find some Medieval remains that help unravel the story of this village at that time.  Our diggers worked hard and it wasn’t long before the first interesting bit of archaeology appeared – an old wall with lots of loose stone and broken slate, as well as various sherds of Victorian pottery and clay pipes. Four groups of school children tackled this trench and made an impressive dent in it before packing up! When not digging the children were learning about coats of arms and recreating their own from natural materials.

Well done Wee Big Diggers and thanks for your help! 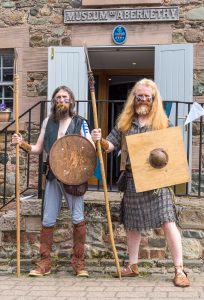 After a great start from Abernethy Primary the Wee Big Dig was off and running! Two community trenches (Dead’s Lane and Williamson Hall) meant plenty to dig and discover for everyone, as well as Pictish Warriors in the village, lots happening at the Museum including free Stone Carving,  Coffee Morning and more!  Another sunny day and we found some fantastic sherd of medieval pottery, particularly some early 12th Century white gritty ware close to the Williamson Hall.

Another busy day in Abernethy with more digging around the village. This time we visited four private gardens and excavated a total of five new trenches.  The majority of finds from the new trenches were later than medieval and included Victorian pottery frags and clay pipe bowls.

The Museum was busy with guided tours up the Round Tower with Adrian Cox from Historic Environment Scotland. These were very popular and thanks to Adrian for giving his expertise on the day.

A big thanks to all the volunteers , supporters and our funders for making this happen. Roll on 2017 !